What do you do if you are bitten by an adder in the UK? 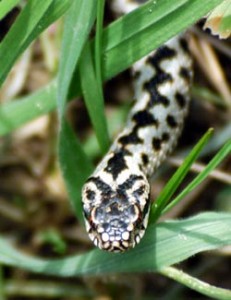 Somehow one doesn’t expect to be bitten by snakes in the UK but in the last week there have been two children who have been hospitalized because of adder bites. A teenage boy had to be put on a heart monitor after he was bitten by an adder while out playing with his sister. The 13 year old was rushed to hospital following the incident which happened while he was running along sand dunes with his 15-year-old sister near Pwllheli beach on Monday. And a three year old boy was also rushed to hospital after being bitten by an adder while walking his dogs in a field near Rhosneigr, Anglesey
Some snakes are venomous and can inject venom (toxin) as they bite. A bite from a venomous snake is a medical emergency as they can be deadly if not treated quickly. However in the UK adders are the only venomous snakes found in the wild. That said some people do keep foreign (exotic) venomous snakes.
According to the Forestry Commission website No one has ever died from an adder bite in the UK for over 20 years.
If an adder injects venom when it bites, it can cause serious symptoms including:
• pain, redness and swelling in the area of the bite
• nausea (feeling sick) and vomiting
• dizziness and fainting
So what first aid should be applied after a snake bite?
• remain calm and don’t panic; snake bites, particularly those that occur in the UK, are not often serious and rarely deadly
• try to remember the shape, size and colour of the snake so you can let the hospital staff know
• keep the part of your body that has been bitten as still as possible to prevent the venom spreading around your body
• remove jewellery and watches from the bitten limb because they could cut into your skin if the limb swells
• do not attempt to remove any clothing, such as trousers, but loosen clothing if possible
And seek immediate medical help by dialing 999 or visit your nearest accident and emergency (A&E) department.

However I wouldn’t worry too much about Adders as apparently sstatistically you have more chance of being killed by a wasp than dying at the teeth of Britain’s only venomous snake.

View all posts by roma →
What do you do if you are bitten by an adder in the UK?